Wrong is the state in which you say or do something that is incorrect.  When you are wrong (all the time it seems), bad things usually happen, especially in the land of YouTube Poop... so don't be wrong, or else you will die!

Wrong is also used in Spa-Dinner and YouTube Poop Music Videos (YTPMVs).  Wrong was originally Mr. Hollywood's catchphrase, but one particular villain named Lex Luthor came to admire Mr. H so much that Lex started using it himself to torture his hostages into telling him valuable information.  Then L. Luthor and Mr. H began to fight for Wrong dominance and it resulted in an epic showdown that got so out of hand that the Dragon Ball Z fighting force had to come and stop it, and doing that took a lot of time and effort.

People Who Are Wrong 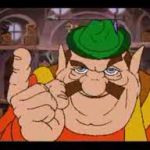